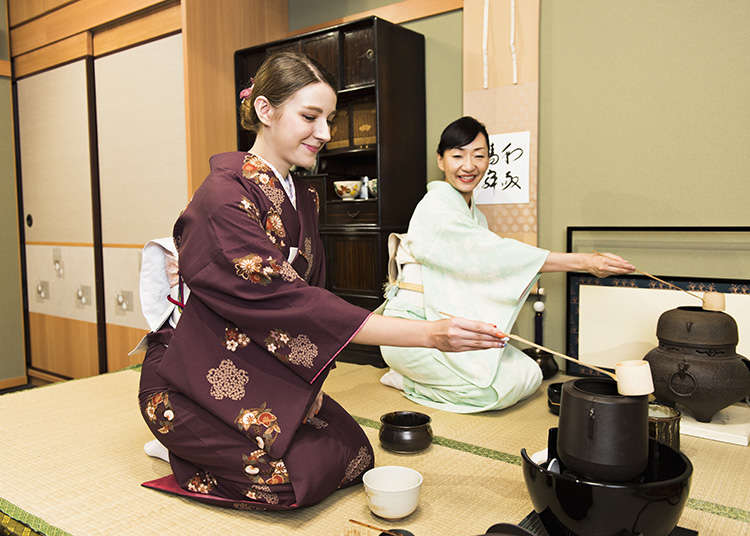 Cha-No-Yu translated means, “Hot water for tea” it is a simple description of tea preparation, but the Japanese tea ceremony adds greater significance in the act of sharing a cup with guests.

The Japanese Tea Ceremony is steeped in tradition founded in the early 1500’s. The contemporary style known best today is accredited to Tea Master, Sen-No-Rikyu. His style contributed to five elemental behaviors that make the ceremonial experience a lesson in Japanese culture and honor.

According to Zen Stories of the Samurai, these five contributions include: “A tea house that can accommodate five people. A separate small room where utensils were washed, two entrances, one for the host one for the guest, a doorway low enough to make the guest bend down to enter, humbling themselves in preparation for the tea ceremony.”

Sen-No-Rikyu brought a dramatic quality to the ceremony that exemplified harmony, respect, purity and tranquility. He died the death of honor performing seppuku after the request to do so was brought forth from Japan’s militant dictator, Toyotomi Hideyoshi.

A Tea Ceremony takes approximately four hours and consists of three parts: a light formal meal, followed by the preparation of two different tea styles, a thin and thick tea.

It begins with the guests entering the Tearoom from the garden with the honored guest entering first. It is customary for the guests to admire the scroll and flower arrangement, both of which have seasonal aesthetics attributed to them. The hibachi (heating element) and kettle are also acknowledged.

The guests are seated and offered a sweet cake. This is similar to a palate conditioner and helps balance the strength of the tea. The host or hostess then enters with the tea bowl and the rest of the utensils for the making of the tea. Usu-cha is the thin version and first tea in the ceremony.

A unique powdered green tea with usage dating back to the 8th century is whisked in the chawan (tea bowl) and is served individually. The guest is to contemplate the occasion but keep conversation to a minimum. When the bowl is empty, it is proper for the guest to examine the bowl with respect and admiration.

A second bowl of tea is offered before the cleansing ritual. After the utensils are cleaned the hostess discusses the tea container and scoop, showing respect for the process. Sometimes these pieces have familial history behind them. The guests exit the tea house to the garden for light conversation before re-entering for the final round of tea. Koi-cha is a thicker tea version and the last served.

It is important for the guest to follow simple respectful rules to show honor to the host or hostess, the other guests and for the ceremony. One is supposed to detach themselves from the material world and experience tranquility through self-control.

Bowing is a gesture of humility and is performed outside the teahouse as well as inside the teahouse. It also is a way to thank your hostess non-verbally. Entering the teahouse requires grace and exacting steps. One must enter, bow, walk diagonally across the mat to your position in a pre-determined amount of steps.

When the tea bowl is offered to you, it is important to turn the bowl with your right hand so your lips do not touch the inscribed letter or pattern. Drinking the entire bowl is respectful and after you are finished, turn the bowl counter clockwise, appreciate it, return it with both hands as your elbows rest on your knees.

The gardens and tea house are representation of paradise where the refreshing of the mind and spirit take place.

As you follow the detailed steps from the garden path that leads to the tea house, time should start to slow as you concentrate on the natural beauty. Letting the world fall away causes your physical body to release stress and you can fully enjoy the present. Enjoying life now is a lesson learned from experiencing the Japanese Tea Ceremony. Tanoshimu!